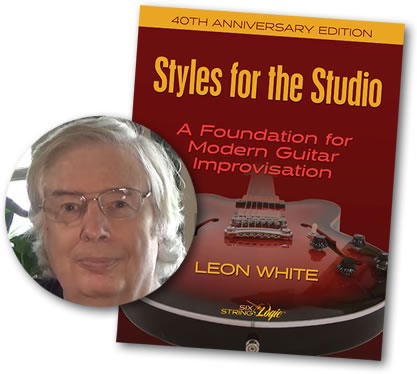 Styles for the Studio
A Foundation for Modern Guitar Improvisation

Leon White, one of the best-selling authors in Guitar Instruction Books, has just released a new version of the classic guitar book for anyone wanting to improve their improvisation on guitar: Styles for the Studio.

Originally issued only in print, Styles now carries over 100 backing tracks and 12 concise videos along with 88 packed pages of new typeset and graphics. Additional content makes it even easier to connect the sounds of improvising to the fingerboard of the guitar in a simple complete fashion. The secret of interlocking scale and arpeggio fingerings and the sounds they bring are fully explained without the need for TAB for beginner and intermediate guitarists. The Mystery of how simple scale spelling can explain the relationship of scales, chords, and melody is laid out in clear diagrams and explanation. In depth discussions of improvising techniques like string bends and double string bends are clearly illustrated. Learning time can now be compressed without losing valuable knowledge of how each part fits together and supports all the other components in creative performance.

Leon is the author of the best-selling book Styles for the Studio and the newly released 40th Anniversary Edition. He is a music educator with a broad background in professional music production from gear to books.

Outside of work Leon remains devoted to his family and the family Springer Spaniel. He enjoys history and science in his reading hours.