I found it hanging on a wall in Honolulu when visiting Eddie Suzuki’s music store. Somebody was going to saw a cutaway into the guitar. I couldn’t let that happen and bought it, unstrung and unfinished (it had been stripped).

I brought it back to Los Angeles and took it to an old repairman, Jack Willock, who had worked at Gibson in the late 1930’s. He showed me his personal L-7 that he had made. Whoa! I said “Go ahead and bring this bad girl back to life in Natural.”

He did. The guitar was so strong I gigged with it in Las Vegas and occasional TV. But it was a BIG guitar. 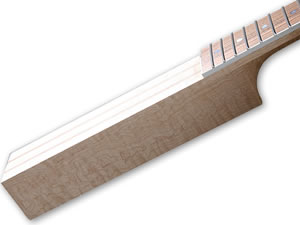 The ‘Super 4s’ and L-5s use the longer 25.5” scale. I’d been using 335’s as primary electric guitars over the years. When I finally sold the Super after several decades, I decided to buy whatever I wanted. Trips around LA yielded nothing. I decided to try a Franken-caster like one I had earlier that was part ’57 Tele and part Hi-A pickups. This resulted in a lot of experimenting. It became a major “Research and Development” project; pickups, woods, scale lengths, etc. etc. etc. were all scrutinized to find the sound I wanted. I learned a lot about magnetics, wire windings, scale lengths and more over 6 years of study and experimenting. 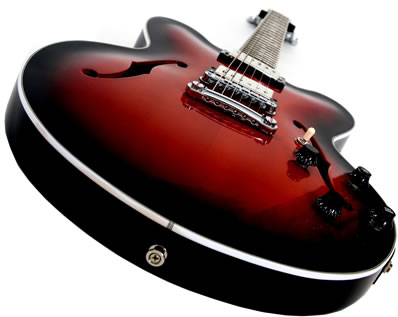 To make a long story longer, a mahogany body (carved) with a carved spruce top with f-holes, two custom wound humbuckers, custom tone controls, etc. became the Sunset Artist model guitar. It has a 25.5” scale, 1 11/16” width neck made out of 3 pieces of maple. (I tried the big Super 400 style headstock, but later made it a more manageable size.)

Until the demand for my music books, I thought I’d be traveling down the guitar building road. As it is, I’m on the divider between both roads and liking the view.

For the curious, here’s a little more information about Sunset Guitars.